Inside the harshest prison in America. Marty’s there for life. Or is he? Some of his fellow inmates have an escape plan. Will it work? Can they manage to break out of Alcatraz?

It is your right to have:

Anything else you get is a privilege.

No-one gets out of Alcatraz. And now, by a terrible twist of fate, Marty has ended up there. Inside the harshest prison in America. Marty’s there for life. Or is he? Some of his fellow inmates have an escape plan. Will it work? Can they manage to break out of Alcatraz?

It is your right to have:
Food, clothing, shelter and medical attention.
Anything else you get is a privilege.

Alcatraz.
The Island.
The Rock.

This is no local state prison. This is a federal prison for crimes against the Nation – the United States of America.

It’s stuck right out there near the Golden Gate Bridge. On a big hunk of stone jutting up out of the waters of San Francisco Bay.

Good old San Fran. How does the song go again? You leave your heart in San Francisco. And then it goes on about the little cable cars reaching halfway to the stars.

The one time I came through the city I only caught a glimpse of the cable cars.

I was on my way to Alcatraz. They take the prisoners out there from a pier that’s well away from the city. They don’t want to disturb the honest townspeople. Don’t want to let the folks on holiday see us either. Might spoil the tourist trade. Prisoners ain’t a pretty sight. Though, when word gets out there’s a new prisoner going over, there’s always two or three guys turn up to watch that early morning boat ride.

Why do they come? Does it make them feel better to see us chained up like slave people? Does it make them feel safer as they go back to their nice homes, with the shiny, big car parked out front? Do they feel better because they know another bad man’s been locked away? I guess it gives them something talk about at dinner. Something to say to their neighbours across the fence.

Puts a bit of interest into their dull, dull lives

I remember that boat ride.

All at once the bridge looms up. Not so much golden Gate as red rust. The big, iron girders arch above us as we go from the city to the national park on the other side. They say the trees there are as tall as the Empire State Building. Then the fog rolls in and I don’t see anything any more.

I can hear the seals though. The noise gets louder as we approach the prison jetty on Alcatraz Island. Those big walruses are just sitting on the rocks staring at us and honking.

Saddest sound I ever heard.

I was going to see and hear a lot sadder things in the next months.

But to tell you the honest truth, on that day, I felt sort of proud to be going there.

I mean I was scared too.

I’d heard all the stories of how tough it was.

And about that Rule Five – the food, water, shelter, medical attention and nothing else thing.

How it was full of guys who’d cut you soon as look at you.

But I was kinda proudful too. I mean I would be among the big boys now. I hadn’t liked it when the judge at my trial had classed me as “a petty thief gone wrong”.

“Easily led astray”, my lawyer had pleaded in his address to the jury.

It made me look none too bright. As if I didn’t have the smarts.
But here I was now.

I was one of the big boys. The real hoods.

On my way to the most famous prison in the U.S.A.

The most famous prison in the whole wide world.

As a person who feels uncomfortable in enclosed spaces a tour of a former maximum security prison wasn’t my first choice for an enjoyable day out in San Francisco. But my husband was keen to go so we took the short boat ride out into the bay past the sea lions to Island of Alcatraz. I thought I might just wander around the recreational and workshop areas, but as we landed we came across a bookstand where a former prison officer was signing copies of his memoirs detailing his life as a young prison guard in Alcatraz. I bought a copy and while chatting to this very courteous older gentleman I asked if he’d met any of the more infamous prisoners, to which he replied casually, 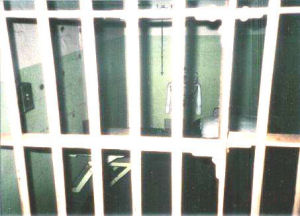 ‘Well, there was the Birdman.’

I imagine the antennae of every writer would have been set aquiver hearing that.

‘Really?’ I said. ‘That must have been interesting…’ [Voice rising at end and tailing off expectantly.]

He was extremely generous with his time, telling me the less than savoury aspects of prison life and of the Bird Man, adding at the end,

‘Of course he didn’t have birds when he was here in Alcatraz.’

‘No. He wasn’t actually the Bird Man of Alcatraz. He had the birds in his previous jail, Leavenworth. But they just ignored that when they were making the movie. It don’t sound so good, does it? Birdman of Leavenworth.’

I agreed it definitely didn’t have the same ring to it.

‘He wasn’t very nice either. He was one I couldn’t feel sorry for.’

‘You felt sorry for these guys?’

‘Oh yeah. Some of them were real bad boys. But others, well…’

I decided that I’d go inside. Something was fluttering in my mind. I was less intrigued by the high profile inmates than the hapless casualties of society. What about those “others”. Who were they? How did they end up in the most notorious prison in the world?

Entering the main Cell Block. [Deep breath. I can do this. Overcome Fear-of-Enclosed-Spaces by Incoming Story Signal to Brain]

Oh Great Galloping Galoshes! There are so many bolts and bars and locks and heavy metal doors with keys and padlocks and chains and shackles and, and,

It’s a real ex-con talking! How he hadn’t meant to get in trouble, as a young man he fell in with the wrong crowd, got carried away by the moment. Lying on his cot bed he listens to the mournful honking of the sea lions in the bay and at New Year the sound of revelry being carried across the water. He remembers his childhood.

Listening to this I walk the bleak echoing corridors, sit in one of the small cells and stare out through the metal bars. On my way out I look at the watchtowers and the coils of heavy duty barbed wire and say,

‘I’m not surprised no one ever managed to get out of here.’

‘Some did,’ says the tour guide.

‘Convicts escaped from Alcatraz?’ I ask in surprise.

‘Not escape, exactly,’ he replies.

A year or so later the specialist publisher, brilliant Barrington Stoke, phoned and asked if I could write a short book with a direct storyline in a straightforward style that would be of interest to teenagers.

Oh, could I? I know that Barrington Stoke books are incredibly popular especially with our reading-challenged children and EAL students. Librarians, Learning Support teachers, those who work with young offenders can’t get enough of them. So I’m thinking of the subject matter. I’m thinking of a young man lying in his cell. I’m thinking of a break-out attempt. And there’s a story vibrating in my head.